For your reputation’s sake 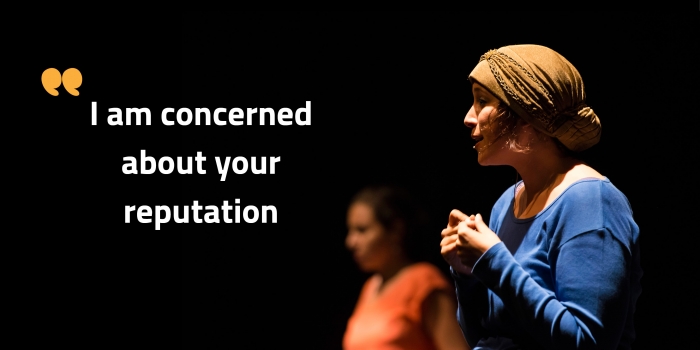 I took the metro from Heliopolis to get to my work in Zamalek.
I was wearing a long, loose dress (not that what I'm wearing should ever be an excuse, but I'm mentioning it just in case).
I was riding in the women's carriage and writing in my diary, thinking about how Egyptian women were really beautiful.
Each woman has her very own beauty, but then the moment the train reaches the platform, they all put on a serious face in order to reduce chances of harassment and so that no one says, “she's asking for it”.

I got out of the Opera Station and I was searching for a taxi when all of a sudden someone touched my behind. When I turned to look, I saw a man in his 40s walking along, as if nothing had happened.
I stared at him, but he was playing dumb (that’s a strategy they follow in order to make me doubt myself, but it wasn't the first time that this happens to me). I started calling him names, and I was about to go up to him to tell him off, when he started running. I ran after him, but I was wearing sandals so I wasn’t able to catch up. That's when I started shouting: "Thief! Thief!"

The reasons I shouted "thief" were:

The first person who noticed me was a street sweeper.
He ran after the harasser, trying to hit him with his broom! Others started running after him until we caught him.
They started looking for what he stole from me, and it’s at that moment that I called him a 'harasser' instead of a 'thief'.

People lost interest, and their numbers grew significantly less.
The boldest people were two soldiers who caught him and took him down with me to the nearest security checkpoint.
There, they asked for our IDs. The harasser turned out to be 41 years old, a father of two daughters, three boys, lives in Al Darb El Ahmar, and (surprise surprise!) works as a ticket conductor in the metro!

We waited for 45 minutes for the police car to come take us to the police station, and in that time, one of the police officers came and begged me to drop the charges!
I don’t know what their ranks were, but they were asking me to forgive him.
I asked them if they'd be okay with this happening to their wives or daughters, and they piped down and said "No!"
So, what do they want from me?

Then in the middle of all this, comes an elderly woman who tells me:
"You know, I always watch out because people are coming and going so things can happen unintentionally." I started shouting at her.
I got angry, because it was clear that they were just wasting time. They said, "Miss, the police car isn't coming so we'll hop into a cab if you don't mind."
They stopped a cab and I rode up front and the accused, one of the soldiers, and a young man who had run behind the harasser and even heard him say he was sorry - but decided that he wouldn't leave me alone - were all in the back seat.

We reached the Zamalek police station, and we headed towards a man that looked like he was the highest ranking officer.
He asked me what had happened, and I told him. He kept telling me to calm down.
The harasser came in and he also asked him what had happened.
At first, he said it was unintentional, but when the officer told him, "that's not to your advantage," he admitted and apologized, and tried to come and kiss my head as I sat there.

We went into the officer's office to write up the police report.
The officer spoke with me outside the room first, and started telling me that I'm his sister's age and that he's concerned about my reputation.
I exploded, "I'm definitely not at fault, and everyone knows that all women are harassed anyway."
So he decided to try something else. He told me that they could give him a beating, teach him a lesson and let him go.
I told him: "No, I don't want you to lay a finger on him. I want my right by the law."

We finally went into the office to write the report. The officer started writing up the report when they stopped suddenly to have breakfast.
After breakfast, it was prayer time. They finished praying and then some other guy came to plead with me to drop charges for the sake of the man's wife, kids and job.
When they started writing the report again, the officer said there was a mistake so they had to start from the beginning for the third time!
We were at this from 11am till 1:30 pm. Then I was really fed up, so I called a friend of mine whose dad is an arms dealer.
The moment my friend's dad came, the officer finished writing the report in 10 minutes on the third take! That was at 2 pm!

They told me to be at the prosecution office at 5pm and I was there on time with another friend of mine, but they came at around 6:30.
While we waited, one of the men who arrived with the harasser told me, "By the way, I beat the hell out of him, and he has now learned his lesson!"
"I didn't ask for this and please don’t do this again, because I want my rights fair and square."

The prosecutor was totally different. He was very understanding: he listened to my statement and asked me about all the details then wrote them down in the report.
Then he asked the harasser to come in so he could hear his statement.
The man's been in custody since Wednesday.
They looked up his criminal record, and found it to be clean, so they're looking into the case and he'll appear before court in 15 days.

His family came to my house to ask me to drop charges.
In principle, it isn't a normal procedure that the accused gets a copy of the police report with all the personal details of the victim!
Thank God they weren't powerful people, and they weren't threatening me or anything. So we told them we'd think about dropping charges.
I'm really confused. I know he deserves this, but my family and friends are afraid for me, since his family knows where I live and what I do.
On the other hand, he isn't a young man, he's a 41 year-old man taking care of a family of six.

I could've dropped the charges on Friday, but I waited till they postponed the court date for another 15 days, so he'd be locked up for 20 days.
Out of respect for my family, and maybe, for his family's sake, I'll drop charges, hoping that he learned his lesson. But if he had been a young man, I would've @#%$%$%^$%&^*&%^*#$%!