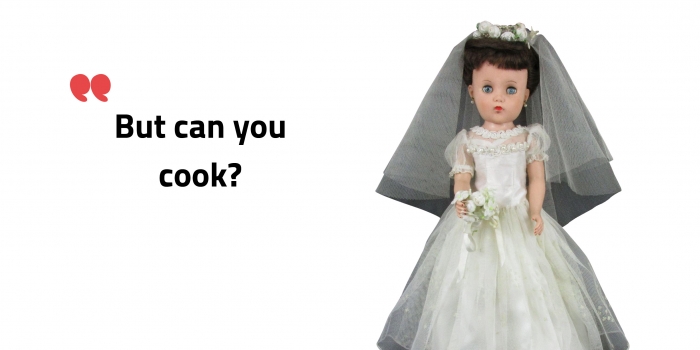 My sister called me one day,
“Souad, where are you?”
“I’m with mama,” I said.
“Okay, I’m on my way to pick you up. Mahmoud is with me.”
“Who’s Mahmoud?”
Mahmoud is a driver my sister knows.
He helps her move things.
He got to know our mother later on.

My sister arrived.
She was driving and Mahmoud was in the passenger seat.
Mahmoud moved to the back seat,
And my mother sat in the front next to my sister.
I sat next to Mahmoud in the back seat.

He made conversation with me while we were on our way,
“How are you, Ms. Souad?”
“I’m fine.”
“So, what degrees do you have?”
“I’ve got a degree in social services and I’m currently working on my masters in community development. I’m supposed to finish this year.”
“That’s fine, but can you cook?” he asked.
“Excuse me? I’m working on my masters and you’re asking if I can cook?” I answered.

I was mad, to be honest.
How could you say such a thing to someone who’s ambitious and hardworking?
I masked my annoyance with some humor, as I usually do.
“Of course I can cook. But I don’t bake,” I joked.
“Okay,” he replied.
He took out a phone from his pocket and asked,
“How old are you?”
“Why are you asking me about my age now? I’m 28. Why?”

I thought he was just another suitor.
I tried to gracefully change the subject.
But it didn’t stop him.
He dialed a number.
“How’s it going, Mohamed?
How old is Hamada?
He’s 25.
Well, she’s around 27.
It’s not a problem.
A few years difference is not a problem.
What matters is that she’s a good match.
Here, talk to the bride.”

I swear this is what happened.
He put the phone on my ear.
Is this really happening?
“Yes, who is this?” I asked.
“We asked people about you.
Good manners is the most important thing to us.
Age is not a problem.
A three or four year difference is not an issue.
My brother is young, yes, but he’s well-built.”
“Who are you?”
“Aren’t you Ms. Souad?” he asked
“Yes, and who are you?”
“I’m Hamada’s brother, the suitor.”

Was I being pranked?
Was this some sort of a joke?
I got really angry.
“I’m 28 years old. Your brother is 25. It won’t work.”
“I told you, ms. Age is not a problem.
Manners and coming from a good family are what’s important.
We already asked about you.
Hamada is coming on vacation in two weeks.
When can we meet?”

I threw away the phone.
I told my sister to stop and got out of the car.
I stood there for a second.
I kept thinking that maybe this was just a prank.
In just a few minutes, he took out his phone and called a suitor.
I’m not a bride!
But this is all nothing next to his reply when I told him I’m working on my masters.
“That’s fine, but can you cook?”