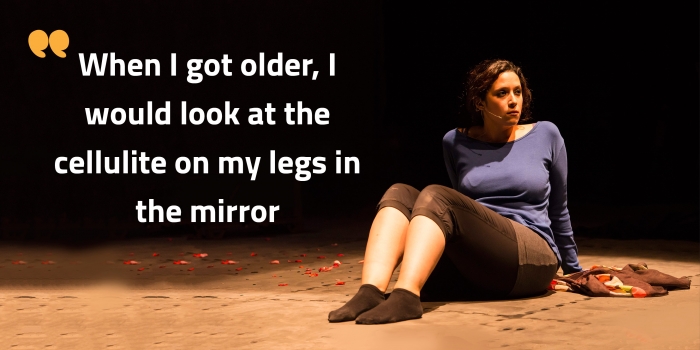 Baba was engaged to a woman called Aida before he married my mom. Mama used to ask him, "Why did you break it off with her?"
He used to say, "She had this infection on her legs which I discovered when I saw her in a bathing suit."

Mama believed him at the time, and didn’t say anything. She used to weigh around 50 kg then.
After giving birth three times—plus the pressure, the stress of everyday life—my mother started to gain weight.
Years later, mama would tell us Aida's story as a joke:
"And he thought she had an infection on her legs, I bet you her legs were just a bit plump."

Since then, I have this image in my mind: an image of Aida wearing a swimsuit, and in the background, you can see the rocks of one of the many beaches in Alexandria—Al Asarfa for instance! She's smiling and excited to swim in the sea with her fiancé.
She turns to look at him; she waves—he's sitting under a parasol—so that he would take a dip with her.
"Come on, Raaouf, come on!"
He just sits there, checking out her legs, making the decision to end their relationship.

When I got older, I would stand and look at the cellulite on my legs in the mirror.
I couldn't understand what it was. I thought maybe Aida did have some infection on her thighs and that I have the exact same thing! Divine justice!
Aida's infection is exactly what my father gets but on his daughter's thighs!

It was when I started paying attention to other women's bodies in the sauna that I realized that everyone who wasn't super skinny had this "infection". But I still can't think of it as normal, or believe that I am not the only one who has "cellulite"