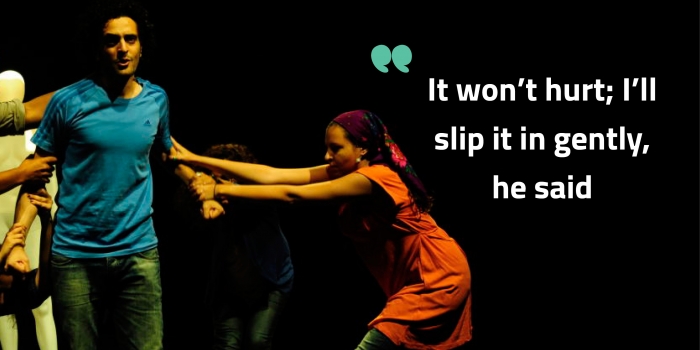 I was driving across the May 15th Bridge on my way to Alef Bookstore.
All of a sudden, I was bombarded with catcalls from a car full of seemingly drunk guys. It’s okay; this stuff happens.
I made it to Zamalek, and I couldn't remember which street the bookstore was in. I was driving around slowly, calling up people who knew the area well.

It turned out my car was protecting me.
The same car as before was suddenly behind me.
Every time I'd enter a new street or get on the sidewalk, they'd start catcalling even louder., I was dying of embarrassment. I looked around. There were people looking, but no one intervened.

One of them got out of the car and came up close to me. He then said the most disgusting thing of all: "It won't hurt; I'll slip it in gently."
I decided to turn around and yell at him.
"You low and disgusting animal! Why won’t you cut it out?"
I was trembling and my eyes were welling up with tears. People were just standing there, looking at me in wonderment.

Oh, so I'm the dirty one now? It was like, how dare I let myself get harassed?
"You all say no at the beginning. We don't get bored, baby”, one of them said.
I was walking faster now, practically running. I turned left into a street that I didn't know was one way only. Neither did they apparently, because they continued to follow me.

In less than a second, I was on the ground after being hit by a car that was speeding down the street in the right direction.
A guy got out of the car and tried to help me up. "Don't touch me!" I screamed.
"I'm sorry, but it's not my fault”, he said. “I can drop you off somewhere. Are you okay? Don’t be scared”.

All I wanted was to disappear.
I got up and walked away quickly. Wiping my tears, I entered the bookstore.

The guys working there looked down at one of my legs.
"What happened, miss?" they asked.
Blood was running down my leg and dripping onto the floor.

I don't remember anything about the time I spent at the bookstore or the way back home.
I do, however, remember a moment alone later that day on my bed.
I burst into tears.
I couldn’t feel the pain in my leg or in one of my arms, which I couldn't move for a week.
I couldn’t feel my whole body; I think I also couldn't see very well.
I was crying because of a much deeper kind of pain. Pain that only a girl who’s been in my shoes would know.