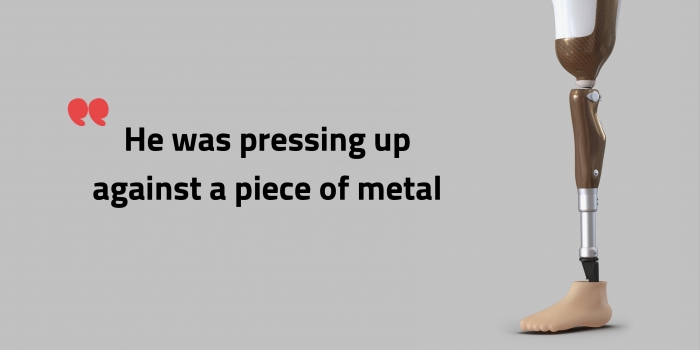 Having a prosthetic leg was never a problem for me.
It’s other people who had a problem with it.
I could see it in their eyes.
The things they say,
Their disapproving looks as I carry myself on crutches.
I lift one leg,
Pause,
And carry the other one.

I was going home from work on one cold day.
It wouldn’t stop raining.
I waited at the bus stop,
Where everyone was freezing.
There were no busses coming along.
Until one bus appeared.
Everyone ran as fast as they could to get on.
I had to take that bus.
I couldn’t wait any longer.
It was hard getting on,
And there were no empty seats,
So I stood with the rest of the people.

The bus stopped frequently and more people got on,
Until it was completely full.
There was a guy standing behind me,
Who wouldn’t move.
He kept pushing my prosthetic leg.
I could’ve easily fallen,
If I weren’t holding tight onto my cane.
No one had the decency to give me their seat.

I didn’t know what to do, so I shouted at him.
“Please move!
This is unacceptable.”
“There's nowhere to go, sweetheart!
We’re keeping each other warm,”
He said as he winked at me.
I didn’t know what he meant.
“What do you mean?”
“Listen, if you have a problem,
You can get off and take a taxi.
Don’t give us a headache.”

A woman who was sitting in the front told me,
“Quiet down, missy.
There’s nowhere for him to go.
What is he supposed to do?
Are you just trying to cause trouble?”
To which someone replied,
“It’s a matter of minutes before you get off,
Just put up with it,
Like we all are.
Besides, he’s over there minding his own business.”

A young man with a short beard looked at me in disgust and said,
“What’s forcing you to take the bus,
And squeeze in between the men?
Stop complaining and stay home.
You women deserve to die.”
I stayed quiet.
I was furious with everyone.
The guy behind me did not move.
I decided to get off the bus and walk home.

As I was getting off,
No one made room for me to pass through.
It’s as if they wanted our bodies to make contact.

I finally got off,
And I could breathe again.
I was trying to figure out what I should do,
When a young girl approached me from behind,
“There’s a stain on the back of your clothes, Miss.”
I stopped to see what she was talking about.
The clothes on my prosthetic leg were wet.

I cried helplessly in the street.
I didn’t know what to do.
I felt naked.
Soon after, it stopped raining,
And I stopped crying.
I had a bottle of water with me,
So I poured it on my leg to clean it.
My clothes were drenched.
The wind picked up again.

An old woman patted me on my shoulder saying,
“What’s wrong, dear?
Why are you doing that to yourself?
You’ll catch a cold.”
“Don’t worry, ma’am.
I can’t feel the cold.
I have a prosthetic leg.
I can’t feel anything.”