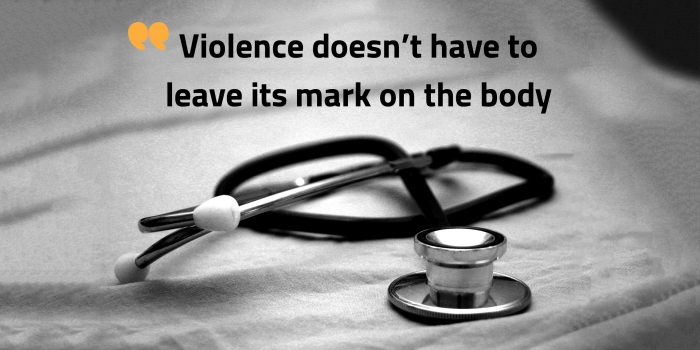 “You should thank God I even loved you.”
Often when we think about violence,
We paint a certain picture in our heads:
A ruthless man physically attacking his wife,
Who’s considered to be weaker than him.
The reasons range from a sadistic desire to establish control to financial or sexual reasons.

But the story that ended with the following sentence,
(“You should thank God I even loved you”),
Reveals a whole other level of humiliation that a girl can be subjected to.
Not because she’s a girl and was forced to be the weaker person,
But simply because she decided, or didn’t decide, to fall in love,
And to exercise one of her God-given rights in life.

The protagonist of this story is not a little girl in pigtails,
Slinging a backpack on her way to school.
The protagonist of this story is an Egyptian doctor,
Who’s quite well-known in her field of specialization.
So well-known, in fact,
That her name is synonymous with that of a certain operation,
That only she, in the entire Middle East, knows how to do.

This doctor is over 30.
And she’s been ignoring the idea of marriage as a societal requirement.
She’d been burying her desire to marry,
Because when she was at the beginning of her twenties,
She discovered a tumor in her uterus.
The only option she had at the time was to live,
After waving goodbye to her natural right to a life in a cruel society.

She dedicated herself to her studies and specialization,
And she succeeded exceedingly.
Doors starting opening for her.
Between her lecturing at the most famous American universities,
Her revered status in the capital of an unnamed Arab country,
And her skyrocketing popularity
She started to feel that finally life was finally giving her a chance.

She met him at one of the conferences.
He was a regular, very Egyptian doctor,
And according to her, he was “peasant-like”.
But despite her harsh description of him,
She didn’t hide her admiration of his continuous attempts
To follow her around at the conference that went on for 7 days.
According to her, they were 7 days of heaven.
Like something out of Nagat and Amin el-Heniedy’s movies.

The “peasant” doctor saw in her someone who was all-around perfect:
Successful, beautiful, confident, and famous.
The kind of person that some people with certain mentalities liked to break.

He started following her everywhere,
He began to follow all her steps, to an annoying degree.
He asked people about her in that unnamed Arab country.
He moved his work just to be close to her.
His attention was gradual,
Like drops of water that slowly wear down rocks.
He wore down her resistance.
She admitted to herself, a year and a half later, that she loved him.

But because all these beautiful feelings were hidden behind so many layers of fear,
The moment she let go, it was as if a dam had burst open.
He was married and his kids were in university,
And she also explained her health situation in full.
Each accepted the other’s circumstances, or so they thought.
Living abroad felt like home so long as he was there.
And home felt empty and lonely if he wasn’t there.
One time, he suffered from acute heart failure,
And she personally bore the expenses of his treatment.
She took him to Paris for an open heart surgery.
She remained by his side,
Pretending to be his wife, while his real wife was somewhere else entirely,
Believing he was on a scientific mission.

During the treatment phase,
He suffered from bedsores.
She insisted on cleaning him up herself and disinfecting the wounds.
She refused to let anyone else in the hospital do that.
She used to feel like he was the son she never had.
He was very grateful to her, or so she thought.

After he recovered, she expected nothing from him
But a pat on the back or a kiss on the forehead.
She wanted nothing more than security,
And she gave herself hope that he would propose to her
But nothing she imagined or hoped for happened.

When she was upfront about it,
He asked her to wait because his daughter was getting married soon.
If word got out about their relationship now,
It could destroy the life of an innocent girl.
She surprised herself by putting herself in his shoes,
Even though nothing he said or did was reasonable.

Her tumor returned in a different part of her body.
Because she was a doctor,
The nature of her job allowed her to keep it hidden.
But her family found out that she was taking meds,
And that she was going to undergo surgery.

She kept it together,
And she found herself caught between playing the role of the doctor who reassures the family,
And being the patient on the stretcher,
Who was being taken into the operating room.
For the longest time,
She was used to burying her feelings deep inside her,
To the extent that when she was on the stretcher,
She was robbed of the fear she was supposed to feel in a situation like that.

But when she saw him walking toward her,
Before she was taken into the operating room,
She felt completely naked.
She was stripped of her masks, shields, and defense mechanisms.
She burst into tears.
Her mother moved closer to her and asked,
“Do you love him?
No one cries this much except in front of the person they love!”

After the operation,
She embarked on her journey of recovery,
Which coincided with another journey,
One filled with her family’s expectations that the stranger whom their daughter cried in front of would appear and make himself known.

Once she recovered,
She returned to the Arab country she worked in,
And to the man she loved.
She asked him clearly to make their relationship official,
At least by way of announcing it to her family.
This was what he told her:
“You should be grateful that I allowed you,
At your age and with your circumstances,
To fall in love.”
Then he disappeared.

He left her feeling very sad,
Because, in her own words, she felt “so cheap!”

Violence doesn’t have to leave a mark on the body.
There are different wounds that scar the soul,
Wounds that can be hard to heal from.