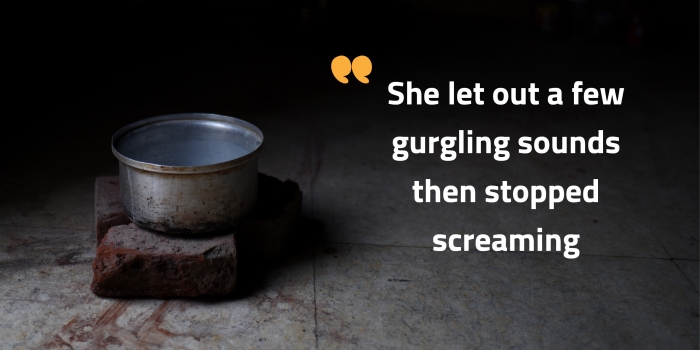 The ancient rural house always filled me with fear.

The fear doesn’t just stem from the tales that we weaved around it,
but also from the terrifying scene that I once witnessed in the courtyard of that house.
This scene has been imprinted in my mind for many years, and I haven't been able to shake it off till now.

The owner of the house was a midwife with an imposing air despite her slim physique.
She practiced her craft for fifty continuous years until she became the queen of her profession without competitors.
Even her daughter, Hamdeya, with her shiny brown skin, was unable to take over her mother’s throne and so she only served as her helper.
However, the midwife’s reputation wasn't the main reason we weaved all these children's tales about her.
Rather, it was the extensive FGM operations she had been performing in that courtyard which planted a deep terror in the heart of every girl who passed by the house.

Her house was right next to my grandmother’s, and that was good enough reason to forbid us from going up to the roof,
so we wouldn't be able to see what's going on in the courtyard next door.
Only my cousin could figure out the mystery after he succeeded in climbing up to the roof a few times, for which he got a bad beating.
But his rebellious nature would not quit until he became an expert on how to sneak up to the forbidden roof.

One afternoon, he took my sister and I while my grandmother was praying. He said he was going to show us something worth a million pounds.
We went up the stairs to the roof and we stood close to the wall that separated our house from that of Nafeesa, the midwife.
Nafeesa was standing next to a plump woman, and next to her stood Hamdeya, carrying a dish filled with boiling water.
Close to her stood her husband, carrying a knife and a stone that looked like it was used to sharpen the knife.
On the couch in front of us was a girl, about 9 or 10 years old, she was shaking hysterically.
My cousin said that they were now preparing for a circumcision, that the girl was with him at school, and that the plump woman was her mother.
I was mortified, but my curiosity compelled me to keep watching.

Several short minutes passed before Nafeesa, Hamdeya and the girl’s mother approached the girl.
Her mother threw her on the couch and pinned her arms down while Hamdeya spread her legs apart amidst the girl's screams and protests
so that Nafeesa could get closer with her knife. Her screams were unbearable and her legs were facing me. I could see everything very clearly.

Nafeesa got to work, and the girl's screams got louder; she let out a few interrupted gurgling sounds then suddenly stopped screaming.
A fountain of blood started flowing from where they cut. My legs could not carry me. I thought the girl had died from the pain.
I fell near the wall, shaking, and the sound of my sobs kept rising, while my sister stood glued to her place staring ahead of her in disbelief.
My cousin pulled me up to my feet and dragged me towards the stairs whispering, “Goddamn you, you're going to get us caught."

We got away before my grandmother could see us. That was the first and last time that I got to see that roof, yet I still remember that incident like it was yesterday.