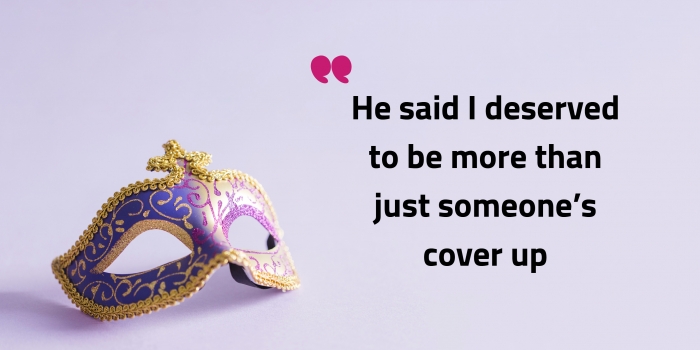 We were together for only two years. He lived abroad. I lived here, in Egypt.
I met him at university. He was popular, and all the girls had a crush on him. He was a well-dressed guy and came from a good family.
I had a crush on him, but I had been too shy to show it.
He started trying to get closer to me and always came to see me when he visited Egypt.

We became attached to one another. He was lovely, gentle, well-read.
He taught me photography, and we were always doing offbeat things and attending Sufi music concerts.
I was fascinated by him, but mostly because he was so polite and treated me so respectfully.
He never asked to do anything inappropriate.

Time and the long distance came between us, and our feelings for one another eventually waned.
I decided to break up with him.
I held up stronger than I thought I would, and life went on.

Until, one day, when  travelling abroad, I ran into a friend of my ex’s. He admitted that he didn’t initially trust me when we first met, but that I now had a right to learn the truth.
“He was my [boy]friend”, he said.
“I know he was your friend”, I said.
“No. He was my boyfriend”.
I felt nothing at first, but then I found myself sinking to the ground and sobbing in the middle of the street.
I don’t remember what he said next or what he tried to explain to me.
I remember him trying to calm me down, saying that I deserved someone better, deserved to be more than just someone’s cover or “beard”.
He apologized for his past jealousy of me, but he said he understood that his boyfriend needed a shield from society.
But what about me?

Thinking back, I realized that we never had gone farther than kissing, even though we often met up abroad.
I started going over all our memories together. Memories that spanned two years.
Had everything been a lie? How had I not known? Was I the reason he was this way? Did I make him hate girls? Was I to blame?
I kept remembering several past incidents, and I felt very stupid.

I didn’t see him or confront him for years, even though the opportunity presented itself more than once.
Maybe the person I was afraid of confronting was myself. Maybe I was hoping everything I’d been told was a lie, so that the good memories would stay as they were, intact.
The years went by and I got  into other relationships, but I still couldn’t shake off the pain from that particular relationship.
I know that a lot of women unknowingly enter into marriages with similar types of men, and that I was lucky and all that.
But I never imagined that something like that could ever happen to me. That stuff only happens in movies and novels.