Not Allowed in Public 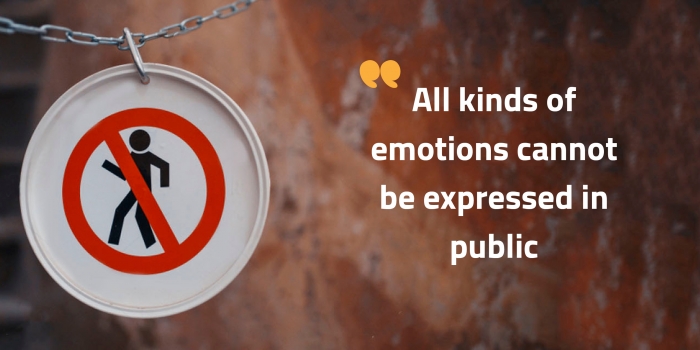 Girls are often told,
“You shouldn’t speak loudly.”
If I speak in a loud voice in public, I hear comments such as,
“Lower your voice. You’re a girl.”
I don’t understand the relationship between being a girl and speaking in a loud voice.
It’s normal to raise your voice when you’re angry, for example.
It’s not something I’m in control of.

Whenever I go to a place with a guy, whether we’re in a store or public transportation,
He has to pay for me.
That really annoys me.
It’s something I could never accept.
But I let it pass just so I don’t make a scene in public.
I usually pay them back by getting them a nice gift,
Or paying for their coffee when we hang out together.

Girls should also follow a certain dress code in public.
And they should walk a certain way.
I remember when I was younger, my mother would teach me not to open my mouth too widely.
I had to be careful while talking not to open my mouth too widely.
“You should talk like this.”
“You should walk like this.”
It’s as if there’s a manual we must follow.
I don’t know who wrote this manual.

Single women aren’t supposed to talk about certain things in public.
There are some stores we’re not supposed to enter alone.
We have to be in a group.
“You can’t go alone.”

And we’re not supposed to talk about makeup.
I was talking to a friend of mine once while we were walking down the street,
“I think makeup is a wonderful thing.
It makes women feel beautiful,” I said.
There was a man walking ahead of me who looked at me in disgust.
“Why are you looking at me like that?”
What did I do to you?”