I didn’t have a childhood.
My mother burdened me with responsibilities very early on.
Women here work on the farm,
Milk the cows,
And feed the birds.
My mother would set off to do these things,
And when she’d come back,
She’d hit me.
“Why didn’t you make dinner?”
domestic violence; gender violence; sexual violence; physical violence; parents; child marriage; divorce; work

I Aged With Marriage 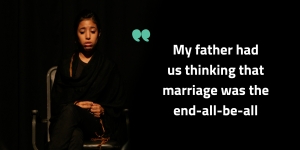 I feel like I aged considerably the moment I got my first suitor.
I was still young, in eighth grade.
After I got married, I started bearing responsibilities, and I grew up.
My father had us thinking that marriage was the end-all-be-all
We weren’t supposed to fight with our husbands.
gender violence, physical violence, parents, marriage, divorce, work

I don't regret anything;
I just had no idea what I was getting myself into:
the lies, the secrecy, the plotting,
the unethicality of the women of the family I was marrying into
and the blind denial of the men.

Clean Up My Shit

He used to hit me,
And curse me.
He wanted me to quit everything: work and school.
Because he wasn’t very ambitious.
He only agreed that I get a job when we decided he’d take my salary.
“You should thank God I married you,” he’d say.
“You’re supposed to clean up my shit.”
domestic violence, marriage, divorce, gender violence, physical violence

I got divorced five years ago.
I’m a mother of two girls: 17 and 13.
I’m 49 years old and I live with my parents.
I’ve been working with NGOs for eight years.
motherhood, marriage, divorce

My mother has been getting on my nerves ever since the divorce.
“She’s become so rude ever since her second marriage,” she’d say whenever I joked around or said anything.
social pressure, gender violence, marriage, divorce, parents

His cousin tried to convince me to go back to him.
I told him I won’t.
He said, “Do it for the girls.”
I told him, “Growing up with a mother and father, who are divorced, but respect one another, is so much better than living with two people who hate each other.”

That was until the day I swore to leave and never come back,
When he beat me and slapped me across my face,
Because we got into a heated argument.
My body bruised and bled.
gender violence, marriage, divorce, physical violence

My Reasons Are Not Shallow 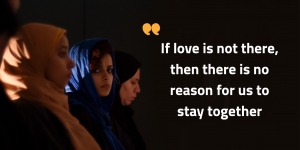 But I realised that he’d been lying to me.
He embarasses me in front of people and makes fun of my work and my opinions.
And if love is not there, then there is no reason for us to stay together.
But I realised that there are so many people who don’t see that as a valid enough reason.

A divor​cée? Why doesn't she marry someone divorced too?
But why would you buy a used car when you can buy a new one?